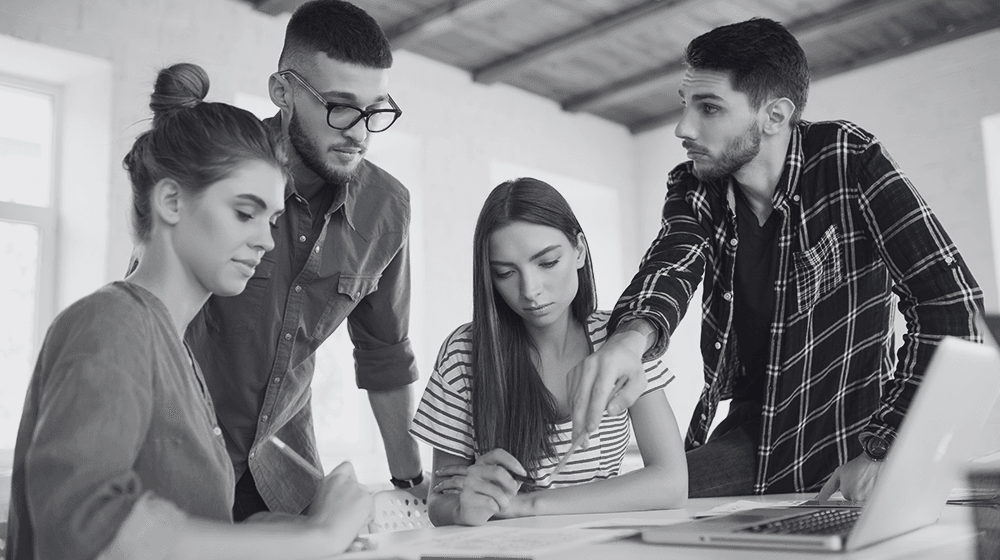 Understanding consumer adoption trends is crucial for developing effective new product marketing strategies. It might be challenging to sell to each type of adopter without having a good knowledge of their values. That’s why we decided to explain who the early adopters are, describe the main types, benefits, and 5 stages of the technology adoption process.

Humans will employ technology as a problem-solving tool as civilization develops. There are several challenges that technology can enable schools to solve. It can help decrease long-term absenteeism, automating pen-and-paper procedures, boosting student retention, and other things.

The first — and most important — step in adopting new technology is recognizing that it is time to do so. There are currently technologies created specifically to assist schools in overcoming obstacles that are difficult to tackle manually.

Understanding consumer adoption trends is crucial for developing effective new product marketing strategies. It might be challenging to sell to each type of adopter without having a good knowledge of their values.

That’s why we decided to explain who the early adopters are, describe the main types, benefits, and 5 stages of the technology adoption process.

Diffusion of Innovations, written by Everett M. Rogers in 1962, describes five different categories of product adopters and gives details on each one. Rogers outlines a social framework for those who accept current innovations; as the diagram illustrates, the adoption of innovations varies during the period of a product's life cycle. 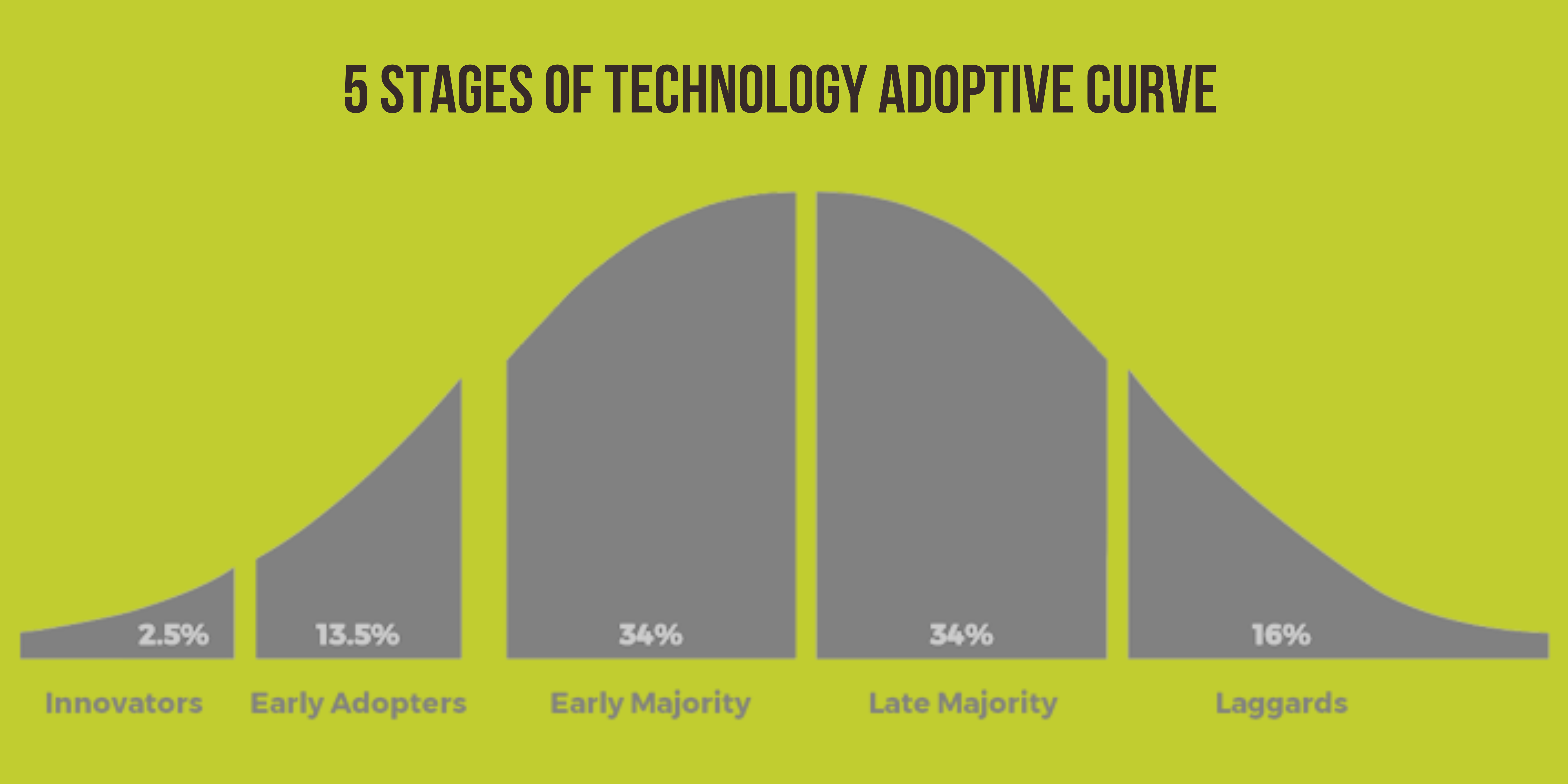 Let’s take a closer look at types of adopters and how they differ from each other in the technology adoption curve:

The first people to adopt an idea are innovators. The characteristics of a first adopter include a willingness to take risks, being the youngest, belonging to the highest socioeconomic class, being highly financially literate, outgoing, having the closest access to scientific sources, and interacting with other innovators. Due to their attitude toward risk, they adopt technology that might ultimately fail. Financial assets help in absorbing these failures.

This group of people takes to innovations the second-fastest. When compared to the other adopter types, the early adopters curve demonstrates the most opinion leadership. Early adopters often have a greater social position, are younger, more financially secure, have higher levels of education, and are more socially progressive than late adopters and are more picky than innovators in their adoption decisions. They understand that making a wise choice in adoption will help them keep their dominant position in communication.

This group of people adopts an innovation over the span of a variable period of time. Compared to innovators and early adopters, this adoption period is much longer. Early Majority are frequently slower adopters, have higher social standing than the ordinary population, interact with early adopters, and rarely occupy positions of leadership in a system.

These people will adopt innovations later than the typical person in society. They adopt innovations only after the majority of society has done so and do so with a high level of skepticism. The Late Majority tends to be unconvinced by innovations and little financial savvy, to have a poor social position, little contact with the Early Majority, and minimal opinion leadership.

People who fall into this category are the last to adopt a new concept. Individuals in this category exhibit little to no opinion leadership, in contrast to some of the previous classifications. The majority of these people are elderly and often dislike change agents. Laggards often focus on "traditions", are the oldest adopters of all, have the lowest social position and financial mobility, are in communication with only immediate relatives and close friends, and have very little to no opinion leadership.

Who are the Early Adopters?

Early adopters definition is the following - ones who test new products ahead of the majority of consumers. Technology products tend to attract early adopters more frequently. They give the vendor input and help improve the features, design, early adopters marketing, and support of the product. Early product adoption can also be seen as a method of testing at the beginning of the life cycle of the product.

Early adopters in marketing are referred to as the first consumers of every cutting-edge product, innovative technology, and start-up business. Before the general public, they are the first to adopt a technology or a product. They may quickly lose interest in the product when others join the bandwagon. Related article: Top 5 Challenges for Edtech Startups and Solutions to Them.

Early adopters can help your business in a number of ways if you're trying to introduce a new product or solution to the market:

Technology early adopters have a crucial role in determining how well an idea spreads through society. In any market, this group of adopters has a significant impact. These characteristics apply to them:

A company must adopt strategies to draw early adopters to the product once it has identified these users and assessed their value to the business.

Companies employ a number of tactics to entice an early adopter, such as:

Early adopters want to be the first to use the product and spread the word about it, which helps the product get some publicity. Therefore, businesses can set up a pre-release for early adopters and compensate them for ordering the product before it launches.

In 2020, if customers pre-ordered the Samsung S20 plus smartphone before the latter's introduction, Samsung would give away their expensive earbuds (wireless earphones) for free. Early adopters are always willing to take a chance when they believe the reward will be worth it. Related article: The Top 13 Most Promising Edtech Startups.

Early adopters were, and continue to be, a key factor in the success of several businesses, like Apple. Apple proves that they take customer feedback seriously by staying in touch with early adopters and listening to their suggestions, and it shows in their software updates. Additionally, businesses can learn about client expectations and obtain creative ideas by developing strong customer relationships.

The first Apple iPhone is one of the early adopters examples. The iPhone cost $600 when it was initially introduced in 2007. Given that Apple had no prior experience in the field, the price was rather high. Nevertheless, despite the iPhone's immense price, many early adopters did not hesitate to buy one. Related article: How Much Does it Cost to Develop an Educational App? 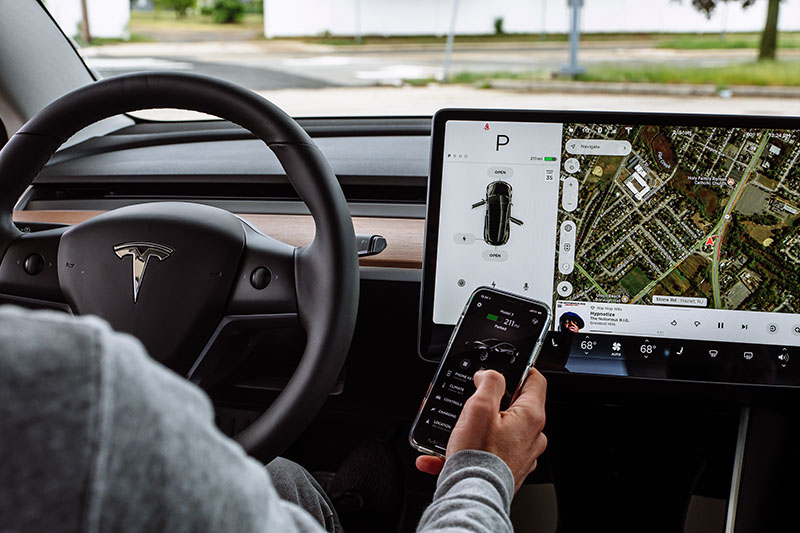 Another example is Tesla. Elon Musk reinvented the market by introducing new technology. Many people chose to buy Tesla vehicles when they initially became available, becoming early adopters of the technology.

These early Tesla adopters had a certain aspect of distinction and mystique surrounding them because they were the first people to employ cutting-edge technology and possess a car that very few others owned. The cost of the vehicles has decreased over time, their quality has improved, and charging stations are now easily accessible.

You can be the early adopter of our PioGroup Software project - DrivEd. DrivEd is a scalable learning management system that can be configured and secured to meet your unique business needs. It streamlines all aspects of school administration, including student issues, HR duties, bookkeeping, payroll, and other procedures.

People who use new products before the majority are called early adopters, it’s the main definition of early adopters. They define trends, take some risks, and have a big say in whether a new product succeeds or fails. This is why many companies work to win the support of early adopters. Early adopters may develop into experts on adoption of new technology, but they also have higher costs associated with using it and run the risk of losing value if it is not widely adopted.